For more information or to purchase any of the books in this series, please visit the University of Nebraska Press

Myths and Tales of the Chiricahua Apache Indians

"We are dealing here with a living literature," wrote Morris Edward Opler in his preface to Myths and Tales of the Chiricahua Apache Indians. First published in 1942 by the American Folk-Lore Society, this is another classic study by the author of Myths and Tales of the Jicarilla Apache Indians. Opler conducted field work among the Chiricahuas in the American Southwest, as he had earlier among the Jicarillas. The result is a definitive collection of their myths. They range from an account of the world destroyed by water to descriptions of puberty rites and wonderful contests. The exploits of culture heroes involve the slaying of monsters and the assistance of Coyote. A large part of the book is devoted to the irrepressible Coyote, whose antics make cautionary tales for the young, tales that also allow harmless expression of the taboo. Other striking stories present supernatural beings and "foolish people." Scott Rushforth introduces this volume, placing the Chiricahua Apaches in history and discussing the pioneering ethnography of Morris Edward Opler. Rushforth is an associate professor of anthropology at New Mexico State University and the author of Cultural Persistence: Continuity in Meaning and Moral Responsibility among the Bearlake Athapaskans.

Myths and Tales of the Jicarilla Apache Indians

The publication of Myths and Tales of the Jicarilla Apache Indians by the American Folk-Lore Society in 1938 illustrated the richness of the material on the tribes of the Southwest. Still a treasure-house of information, it appears with a new introduction and for the first time in paperback. Morris Edward Opler based his pioneering work on the accounts of Jicarilla men and women born in the nineteenth century. In a preface he explains that the stories, sacred and profane, were meant to be told on winter nights. The book takes up the creation of the universe, the birth of Killer-of-Enemies and Child-of-the-Water, the slaying of monsters, and the Hactcin ceremony. Other myths center on games and artifacts, hunting rituals and encounters with supernatural animals, and the trickster Coyote. There are also vivid, earthy stories of foolishness, unfaithfulness, and perversion; mon-strous enemies; and Dirty Boy's winning of a wife. A professor emeritus of anthropology at the University of Oklahoma, Morris Edward Opler is an authority on the Apaches. In his introduction Scott Rushforth considers Opler's work as well as the history of the tribe.

Myths and Traditions of the Arikara Indians 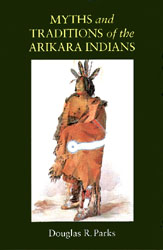 When trappers and fur traders first encountered the Arikara Indians, they saw a settled and well-organized people who could be firm friends or fearsome enemies. Until the late eighteenth century the Arikaras, close relatives of the Pawnees, were one of the largest and most powerful tribes on the northern plains. For centuries Arikaras lived along the middle Missouri River. Today, they reside on the Fort Berthold Reservation in North Dakota. Though much has been written about the Arikaras, their own accounts of themselves and the world as they see it have been available only in limited scholarly editions. This collection is the first to make Arikara myths, tales, and stories widely accessible. The book presents voices of the Arikara past closely translated into idiomatic English. The narratives include myths of ancient times, legends of supernatural power bestowed on selected individuals, historical accounts, and anecdotes of mysterious incidents. Also included in the collection are tales, stories the Arikaras consider fiction, that tell of the adventures and foibles of Coyote, Stuwi, and of a host of other characters. Myths and Traditions of the Arikara Indians offers a selection of narratives from Douglas R. Parks's four-volume work, Traditional Narratives of the Arikara Indians. The introduction situates the Arikaras in historical context, describes the recording and translation of the narratives, and discusses the distinctive features of the narratives. For each story, cross references are given to variant forms recorded among other Plains tribes. Douglas R. Parks is a professor of anthropology and associate director of the American Indian Studies Research Institute at Indiana University. His publications include an edition of James R. Murie's Ceremonies of the Pawnee (Nebraska 1989).

Mythology of the Blackfoot Indians, originally published in 1908 by the American Museum of Natural History, introduces such figures as Old Man, Scar-Face, Blood-Clot, and the Seven Brothers. Included are tales with ritualistic origins emphasizing the prototypical Beaver-Medicine and the roles played by Elk-Woman and Otter-Woman, and a presentation of Star Myths, which reveal the astronomical knowledge of the Blackfoot Indians. Narratives about Raven, Grasshopper, and Whirlwind-Boy account for conditions in humanity and nature. Many of the stories in the concluding group-like "The Lost Children" and "The Ghost-Woman" -were tales told to Blackfoot children. Clark Wissler notes that these narratives were collected very early in the twentieth century from the Piegans in Montana and from the North Piegans, Bloods, and Northern Blackfoot in Canada. Most were translated by D. C. Duvall and revised for Mythology of the Blackfoot Indians by Wissler. Wissler (1870-1947) was curator at the American Museum of Natural History and chairman of the Department of Anthropology at Columbia University. Among his major works are North American Indians of the Plains and Man and Culture. Introducing this Bison Book edition is Alice B. Kehoe, a professor of sociology and anthropology at Marquette University and the author of North American Indians: A Comprehensive Account.

The Pawnee Mythology, originally published in 1906, preserves 148 tales of the Pawnee Indians, who farmed and hunted and lived in earth-covered lodges along the Platte River in Nebraska. The stories, collected from surviving members of four bands-Skidi, Pitahauirat, Kitkehahki, and Chaui-were generally told during intermissions of sacred ceremonies. Many were accompanied by music. George A. Dorsey recorded these Pawnee myths early in the twentieth century after the tribe's traumatic removal from their ancestral homeland to Oklahoma. He included stories of instruction concerning supernatural beings, the importance of revering such gifts as the buffalo and corn, and the results of violating nature. Hero tales, forming another group, usually centered on a poor boy who overcame all odds to benefit the tribe. Other tales invited good fortune, recognized wonderful beings like the witch women and spider women, and explained the origin of medicine powers. Coyote tales were meant to amuse while teaching ethics. George A. Dorsey (1868-1931) was a distinguished anthropologist and journalist who also wrote about the traditions of the Arapahos, Arikaras, and Osages. Douglas R. Parks is a professor of anthropology and associate director of the American Indian Studies Research Institute at Indiana University. He is the editor of James R. Murie's Ceremonies of the Pawnee (Nebraska 1989) and the editor and translator of Myths and Traditions of the Arikara Indians (Nebraska 1996).

Traditions of the Arapaho

Anthropologists George A. Dorsey and Alfred L. Kroeber joined forces to record and preserve the rich cultural traditions of the Arapaho Indians, long split into two bands. Dorsey had done fieldwork with the Southern Arapaho after they moved from Colorado to Oklahoma and would soon be known for his study of their Sun Dance. Kroeber had visited the Northern Arapaho, who were still living in Wyoming. Traditions of the Arapaho, first published in 1903, is the result of their collaboration. This collection of tales bears witness to the religious feeling, imagination, and humor of the Arapaho. Beginning with creation myths, Dorsey and Kroeber offer stories about Found-in-Grass, Blood-Clot-Boy, Badger-Woman, Blue-Feather, White Dog, the Rolling Stone, Porcupine, and the Woman Who Climbed to the Sky. Entities marvelous and mundane-water monsters, speckled horses, dancing ducks, cannibalistic dwarves-populate these vibrant tales, where spirit permeates everything, and everything has meaning. George A. Dorsey's (1868-1931) works include The Pawnee Mythology (Nebraska 1997); Alfred L. Kroeber (1876-1960) is the author of The Arapaho (Nebraska 1983) and other works. Introducer Jeffrey D. Anderson is a professor of anthropology at Colby College.

Traditions of the Caddo

Hernando de Soto encountered the Caddos in the sixteenth century, and survivors of Sieur de La Salle's last voyage in the late seventeenth century gave the first full description of them. By 1903, when George A. Dorsey was investigating their customs and beliefs, the Caddos, numbering 530, were living on a reservation in Oklahoma. The Caddoan tribes, found along the Red River and its tributaries in present-day Louisiana and Arkansas, practiced agriculture long before they hunted buffalo. The tales collected for this book, first published in 1905, reflect the women's horticultural practices (supplemented by the men's hunting), village life distinguished by conical grass lodges, family and social relationships, connection to nature, and ceremonies. The tales vibrate with earthly and unearthly forces: Snake-Woman, who distributes seeds; Coyote, who regulates life after death; the Effeminate Man, who brings strife to the tribe; Coward, son of the Moon; the Man and the Dog who become Stars; the Old Woman who kept all the pecans; Splinter-Foot Boy and Medicine-Screech-Owl; water monsters; animal-people; and cannibals. George A. Dorsey (1868-1931), an anthropologist who taught at the University of Chicago, published numerous works, including The Pawnee Mythology, available as a Bison Book. Wallace L. Chafe is a professor of linguistics at the University of California, Santa Barbara, and the author of Seneca Thanksgiving Rituals.